Here is a picture of William Pearce and his mum Eliza Pearce for this weeks Sepia Saturday. Click here for more wonderful sepia Saturday pictures and stories!

The picture was taken at their property on Aikmans Road, Merivale, Christchurch about 1920.  Don't you just love the old sidecar, more like a woven basket for your legs than a vehicle, with a place to put your hands under the leather weatherproof cover, to keep them warm.  Of course wearing your every day hat was necessary when posing on a bike for a photo.  From other photos we have they actually wore leather helmets a bit like aviators wore.  I don't think they would have protected the head very much.

We have dozens of these motorbike photos and even a photo of a bloke's shed from the 1920s with car and bike parked up inside.  I'm so lucky to have them.
Posted by Bel at 00:26 12 comments:

The following photos are of the Pearce boys and an unknown friend or relation in a cute tent.  The photo was taken around 1920.  We are not sure where they are camping but it is probably somewhere quite local to the Christchurch region, New Zealand.  It looks like dry hard ground they are on and there is a building visible on the left hand side.

One can imagine the excitement that two smaller boys would have had camping out for the night.  It looks like they are fairly well set up as it looks like some kind of lamp hanging in the back of the tent.

The Pearce family had four boys and from photos we have, they were into hunting, camping, travelling and lots of boys stuff.  My great grandad Arthur Cyril Pearce was also into photography, hence why we now have these wonderful pics from the past.

From left to right are Albert Pearce, William Pearce, Walter Pearce and a friend! And behind the camera was my great grandad! 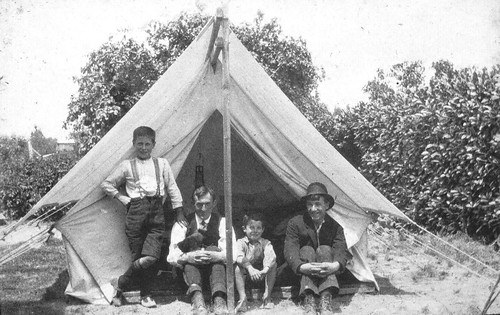 Bel
Welcome to my family history blog. Please enjoy. Please get permission from me, the author, first before using any of the photos or text on this site and always reference this blog as your source. Please inform me if you find any mistakes and feel free to contact me if you are related at belinda.lansley(at)yahoo.co.nz Copyright, All rights reserved. © B. Lansley, 2012